This trek route follows an old Shepard trail between Kangra and Kullu. Starting through the dense forests and Alpine meadows, the trail climbs over the high mountain passes finally into Kangra, the most scenic Valley in Western Himalayas. Each day trek winds through beautiful but diversified landscapes. This is another world, decorated by the variety of high altitude Himalayan flora, This area is also popular for the Himalayan brown bear, black bear and other Himalayan fauna comprising of fox, leopard, musk deer, monkeys, giant indian flying squirrel etc. A trek that leaves one wondering at the awesome beauty of Himalaya. Along the trail, an ample opportunity to explore the remote Gaddhi villages, which remain in isolation for most of the year. 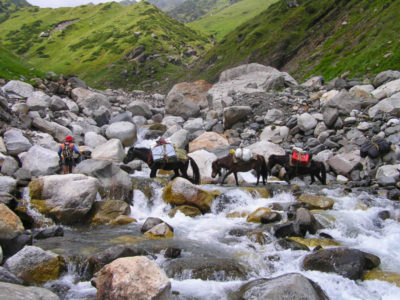 Starting from Manali, the trail gradually climbs to the lush green meadow of Lama dugh. Next part of the walk is through the moraine affording magnificent view of the mountain peaks of Kullu and Lahaul, steep climb to the top of The Kali Hani pass . Descent on the moraine to the bank of a stream. The journey now winds down to the valley floor along the Soony river to the ancient village of Bara Bhangal. Bara Bhangal: A remote and isolated village inhabited by the Gaddhis who lead a nomadic life. From here we trek amidst the spectacular view of Dhauladhar Range over Thamsar pass from rocky and glacial terrain to the softer landscape. Last part of the trek is through meadows, forests and the cascading waterfalls; soon the tiny villages makes appearance literally hanging on the shoulders of the hillside, giving them a surrealistic appearance. Providing an extensive view of the Kangra Valley the trek finally ends at Bir – a small Tibetan Village that has a monastery. From Bir one can drive to Dharamsala or for onward journey to Delhi. 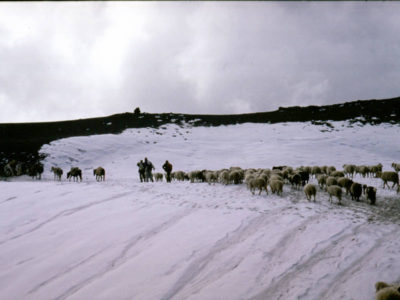 Day 01
MANALI to LAMADUGH (at 3.000 m)- 5 to 6 hours: The first day of the trek goes through cool forests of giant deodar (cedar), alder and oak. The trail climbs gently at first through the Manalsu valley along the Manalsu torrent. Extensive views of the Kullu Valley appear and slowly fade into the distance as the degree of the gradient decreases, the gentle slope of the first campsite in the lush green meadows of Lamadugh is reached. From here beautiful views of the surrounding peaks open up.

Day 02
LAMADUGH to RIALI THATCH (at 3.414 m): The trail now begins to ascend steeply through woodland and meadow, with wild alpine flowers strewn all around. On the way brilliant shrubs of Rhododendron and Birch pave the way to the ridge, looking out across spectacular peaks, after which a descent leads to the campsite at Dohra Nallah.

Day 03
RIALI THATCH to base of KALIHEYNI PASS (at 4.725 m): A lovely walk through lush green forests to the campsite at the base of the Kaliheyni Pass (4.725 m). The campsite itself is at an elevation of 4.023 m. The mountain peaks of the Kullu and Lahaul valleys are visible throughout. 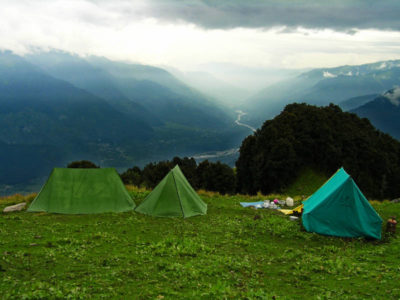 Day 04
Over KALIHEYNI PASS to MEADOW CAMP – 8 to 9 hours: The landscape slowly begins to change as forests and meadows give way to rocky outcrops with patches of snow starting to appear. A rather steep climb through glacial debris and snow leads to the top of the pass, from where breathtaking views are available. After a brief halt a descent through glacier and moraine leads to the campsite on the banks of a sparkling mountain stream.

Day 05
MEADOW CAMP to GADDI THACH (at 3.577 m): The trails now leads down into the Sunni River Valley and up to the buff overlooking the river. Camp is set at Gaddi Thach.

Day 06
GADDI THACH to LAMBAPAD – 3 to 4 hours: Leaving this lovely campsite, the path winds through rocky terrain soon replaced by meadows again. The river rushes through spectacular gorges and is crossed via a snow bridge. Forests begin to appear and soon the campsite, with an abundance of dry wood next to a sparkling stream is reached.

Day 07
LAMBAPAD to SUNNI VALLEY CAMP (at 3.658 m): The trail now descends to the river bank. The campsite is by a stream which adds to the beauty of the surrounding landscape, one of the most magnificent in the Western Himalayas. 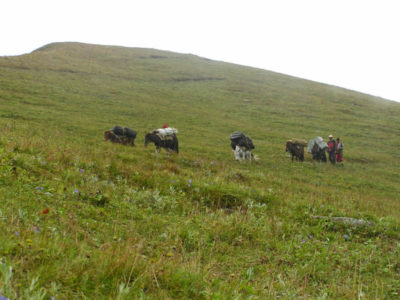 Day 08
SUNNI VALLEY/BARA BANGAL (at 2.286 m): The trail now winds its way down towards the valley floor, after which an almost level walk leads to the camp just before the tiny ancient village of Bara Bangal.

Day 09
REST DAY: A remote and isolated village, Bara Bangal is open only for four or five months of the year. The inhabitants are the legendary Himalayan shepherds – the Gaddis – who lead a nomadic life, herding their flocks of sheep into high mountain pastures once the snow melts and then returning to their isolated existence in the village. Note: It is recommended that there be two rest days in Bara Bangal; one to visit Kail Dhar which offers a 360-degree panoramic view of snow peaks and the second day to visit the charming village of Bara Bangal.

Day 10
BARA BANGAL to UDAG – 6 to 7 hours: A steady climb, with the scenery changing quite dramatically and the air getting cooler, leads to the campsite at Marhi, at the base of the Thamsar Pass. The evening chill is replaced by the comfortable warmth of a lively campfire.

Day 11
UDAG to PANHARTU over THAMSAR PASS (at 4.800 m) – 8 to 9 hours: A long walk today. The trail slowly emerges from the rocky terrain into the softer landscape of lakes, meadows and forests. Numerous lakes dot the countryside, interspersed by cascading waterfalls. A descent through green wooded slopes leads to a tiny tea shop and a while later, to the tiny village of Palchak. Camp nearby.

Day 12
PANHARTU to RAJGUNDA – 5 to 6 hours: A very pleasant day’s walk through a leafy bridal path and soon tiny villages, seemingly hanging on the shoulders of the hillsides, make their appearance. Camp is set near the small village of Billing.

Day 13
RAJGUNDA to BIR – 3 hours: The bridal path leads onto the town of Bir. On the way extensive views of the lush green Kangra Valley open up. A steep descent leads to the tiny Tibetan settlement of Bir. From Bir drive to Dharamsala (3-4 Hrs.). 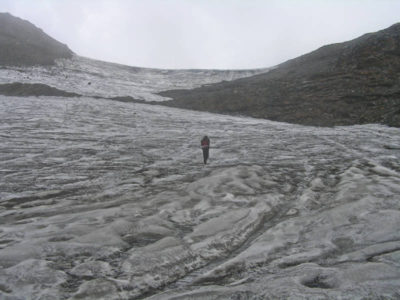 Day 14 OPTION Kangra Valley Excursion Dharamshala (1.387 m)
To the north, the Kangra valley is flanked by the snow clad Dhauladhar ranges of the Himalayas, to the side which Dharamshala and Mcleodganj (also called Upper Dharmshala) Founded in 1855, Dharmshala is the principal township of Kangra commanding splendid view of the surrounding country. Surrounded by deodar forests, it is set against a back drop of massive snow capped peaks on three sides.

Kangra Valley is one of the Himachal’s beautiful valleys. It rolls down the Southern edge of magnificent Dhauladhar Range. While the snow line remains close enough at all times and during winter month, the Northern part is swaddled in a blanket of freshly fallen snow allowing the magic of Kangra to take on yet another hue. Numerous ancient temples like Bajreshwari, Rock cut Temples of Masroor and Norbilingka Institute, lie on the plains below Dhauladhar. One can spent whole day, visiting these temples and Institute.

Astronomical Medical Center: About 8 km from Norbulingka Institute. The Tibetan medicine is made from herbs gathered from the high altitude of the Himalayas. This herbal medicine can cure many different diseases and are famous all over the world.

McLEODGANJ
If you think about Lahsa (Tibet), the only other name comes in mind is, Mcleodganj. The name has almost become synonymous to Lahsa. This is where His Holiness Dalai Lama, the spiritual leader of the Tibetan’s, resides and also this is where the head quarters of the Tibetan Government in exile are located. Here one gets amazed to see that how the Tibetan peoples in exile, have kept their culture resonant and going. Here there are many gompas to visit and some of them house treasures of ancient and priceless thankas and scrolls. Tibetan Institute of performing Arts (TIPA) preserves a number of musical dance and theatrical traditions of Tibet.

Day 15
Dharamshala to delhi (by car) 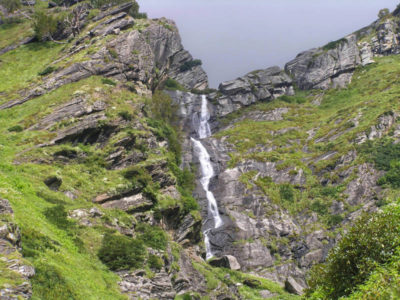 Length of the trip: 14 days

Included in the price are: all transports from Manali to end of trek; all meals (lunch, dinner and breakfast) during the expedition; mountain guide (are certified and experienced and speak english) and other staff (kitchen team); camping and climbing gear (tents, sleeping bags and sleeping mats, stoves, first aid). Note: not included is the accomodation in Manali and Dharamshala

Offer valid: this tour is available during September to October 2018